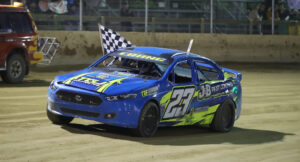 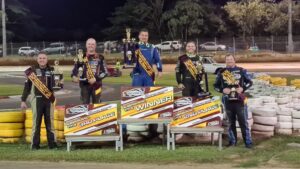 Crang started from pole position, but as the race saw unfolded numerous drivers led the race at some point. This included Adam Jorgensen, Darran Lester and Aidan Raymont (who started from position 12 and worked his way to the lead until he retired to the infield with a flat tyre. Raymont missed his final heat during the night after sustaining damage in his fourth heat).

Crang was able to work his way back to the lead to again drop back to second behind Darran Lester. As the closing stages of the race unfolded, the battle for the lead was intense between Crang, Lester and Macdonald. Crang was able to get back into the lead just as the leaders caught traffic just as another yellow came on as Baxter was involved in a crash on the back straight.

At the restart with only four laps to go, Crang raced home to win the Queensland Title in front of a big North Queensland crowd. Darran Lester was impressive all weekend to finish second ahead of Shane Macdonald, Tim Weir and David Head who rounded out the top five.